APPEARANCE
Bald except for a black ponytail and sporting long, narrow beard, Mr. Plugg somehow looks angry, miserable, and uncomfortable, all at the same time. Bare-chested, he wears an immaculate coat with pearl buttons and carries a cat-o’-nine-tails with him at all times. He clearly takes great pride in himself—everything about him shines, from the polish on his boots to the dome of his head. His teeth are gray and yellow, however, and his face is fixed in an almost constant grimace. 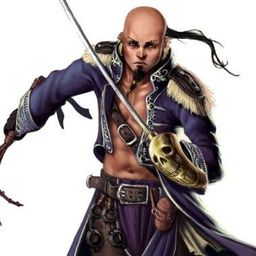