Captain of the Bonaventure

Golden Eagle Epaulets These decorative golden shoulder braids grant Captain Pegsworthy a +2 competence bonus on Diplomacy and Perception checks. In addition, they allow him to cast bless once per day. Finally, if Captain Pegsworthy is reduced to 0 or fewer hit points, the epaulets automatically cast a sanctuary spell (Will DC 11) on him. Golden eagle epaulets are fully detailed on page 26 of Pathfinder Companion: Andoran, Spirit of Liberty. DESCRIPTION
Merrill Pegsworthy wears a blue greatcoat with golden shoulder braids, and a wooden peg leg where his left leg used to be. During boarding actions, he also wears a mithral chain shirt, and carries a mighty greatsword.

HISTORY
Merrill Pegsworthy began his career in the Andoren navy as Merrill Tantrey, eventually becoming an Eagle Knight of the Steel Falcons and joining the infamous fleet of the Gray Corsairs. As a loyal patriot, Captain Tantrey and his ship the Bonaventure faced down the Chelish navy and Inner Sea slavers alike through dozens of missions on behalf of Andoran and the precepts of liberty. He unflinchingly watched many comrades die in action, and even lost his younger brother in a storm off of Yanimere Island, yet never swerved from his duty or his oath to serve the cause of freedom and democracy with his last breath.

In the end, it was not Tantrey who turned away from the cause, but the cause that turned away from him. In an engagement with Katapeshi slave galleys off the Scorpion Coast, his right leg became fouled in fallen rigging lines as one of the Bonaventure’s masts broke from a hurled catapult stone. As the mast fell into the sea, it carried Captain Tantrey with it to what would have been his watery grave, had not his first mate and best friend, Carson Drale, dived in to save him. Lieutenant Drale swam down but was unable to free the trapped leg from the tangled lines. Quickly using his famous blade Steeltooth, Drale severed the captain’s leg and pushed the feebly struggling Eagle Knight back toward the surface, where a ship’s boat was waiting. The lieutenant’s own metal cuirass weighed him down too much, however, and he never made it back to the surface. Even as a naval cleric stanched the blood flowing from the bleeding stump, Captain Tantrey swore an oath to the memory of his first mate, who had given his life to save him, that he would not allow the injury to keep him from the sea.

Captain Tantrey was transported back to Augustana to recover, but lacked the funds and the clout to have his leg magically regenerated. Instead, he had it fitted for a peg and joked that he would be the first one-legged captain in the Andoren fleet. The admiralty did not take his injury so lightly, however. Tantrey was told that he was no longer fit to command a ship of the line and was reassigned to desk duty in the shipyards. Captain Tantrey appealed his reassignment to the admiralty and ultimately to the People’s Council. For over 2 years he wrote letters and made overtures without headway until he chanced upon the Admiral of the Fleet one day on the street. Referring to Tantrey’s continued doggedness, the admiral laughingly remarked to a member of the Council that Lieutenant Drale should have let Tantrey drown: “Of more value to the cause of liberty is a foolish mate than the honorable ‘Captain Pegsworthy.’”

This insult not only to himself but also to the sacrifice of Lieutenant Drale, along with the sure knowledge that the Council took his appeals no more seriously than did his superior officers, caused something to snap in Captain Tantrey. His oath to Drale now seemed to outweigh his loyalty to the Eagle Knights. Tantrey began quietly recruiting others who had been drummed out of the navy for supposed infractions and used his extensive knowledge of the shipyard’s routines to make his plan. On the next occasion that the Bonaventure was in port for repairs, the
ship’s sentries were found tied up in a carpenter’s shack—the ship was back under the command of the one-legged captain and making for the open sea. Thus was born the infamous Free Captain Pegsworthy of the Shackles.

Now based on Firegrass Isle, Captain Pegsworthy controls four ships: the Bonaventure, the Drale, the Hound, and a newly acquired Chelish galleon.

PERSONALITY
Pegsworthy is an honorable man, as pirates go. he is much less interested in “the greater good” and much more focused on individual honor and loyalty. He defines his own code of conduct and sticks to it. He is a ruthless but fair adversary and is prone to holding prisoners of worth for ransom and letting those without such means go free. For this he is a Free Captain both popular and reviled among his peers. That he stills wears his Eagle Knight coat and epaulets makes his fellow captains nervous, but his skill and knowledge of naval combat along with his willingness to engage in battle with ships of Andoran make them recognize his value as an ally. For his part, he goes his own way making few enemies and fewer friends.

Nakayama Tatsumi is his trusted right-hand man, recently promoted to command the Kitsune. Other crew members on the Bonaventure include a priest of Caydan Cailean named Eggal Torkelsen (now deceased); Labella Loor, his first mate; Durgrin, a dwarf sorcerer, Markuss Pinch, the tiefling quartermaster, and Renvel Carron, the human Master-At-Arms.

Pegsworthy has no love for Barnabas Harrigan, having clashed with the under-handed rogue more than once in the past.

TACTICS
During Combat If possible, Captain Pegsworthy focuses his attacks on spellcasters first. He uses cooperative tactics, such as trying to gain flanking positions with an ally.
Morale If a fight becomes hopeless, Captain Pegsworthy makes a tactical retreat, even leaving allies behind if necessary in order to gather reinforcements to get his revenge, knowing that if he dies futilely, he will have no chance to make his enemies pay. 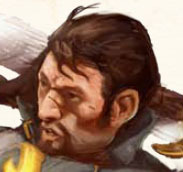