APPEARANCE
Owlbear Hartshorn is a towering hulk of a man with meaty fists. He has taken to clowning, laughing, and crying out random phrases at the top of his voice. His shaved skin still shows signs of the tarring and feathering the crew gave him as a cruel joke not so long ago.

BACKGROUND
Owlbear was Mr. Plugg’s “pet,” a simpleminded brute brought out on special occasions, such as when someone needed to be taught a lesson – or killed. Plugg dared one of the PCs to fight Owlbear; Feruzi defeated the giant, then won his loyalty by showing him mercy and respect.

Owlbear came with the skeleton crew assigned to take the Man’s Promise to Port Peril. Chained to the mast in the captain’s cabin, Owlbear’s dedication to Feruzi overpowered his fear of Mr. Plugg. Rather than intimidate him back into service, the captain murdered Owlbear in cold blood.

PERSONALITY
Owlbear was fond of the PCs, especially Feruzi. He also liked to eat live crabs, breaking the shells with his teeth and fingers. 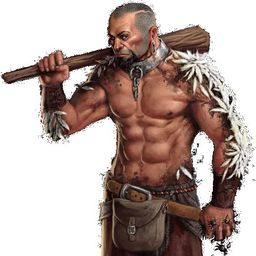