Rahadoumi Thief, Navigator on the Crisis APPEARANCE
Leila al-Zahra is twenty, a lithe 5’7” and 110 lbs. Her dark brown eyes are alert to her surroundings, set in the kind of face that makes most men look twice. Waves of lustrous black hair are usually gathered in a braid or ponytail, reaching just past her shoulder blades. Her dusky skin is marked by tattoos – a tangle of red roses and thorns around her right ankle, a sword-stabbed heart on her right shoulder, and a skull and crossed sabers on her left arm.

Leila normally wears a loose white tunic, a red vest, and black pantaloons. She favors a leather belt and tall black boots; she hides her lockpicks in the right boot. A trusty short sword and matching dagger hang on her belt in shabby leather scabbards. When she expects danger, she dons leather armor, and sometimes wears another knife strapped to her forearm. A backpack holds the rest of her equipment, including her cartographer’s tools, an abacus, and a gray cloak she wears in bad weather.

Around her neck at all times is the Compass Rose, a bronze medallion on a silver chain.

BACKGROUND
Leila hails from Azir, the capital of Rahadoum. Leila never knew her mother; her father, Kamal al-Saif, was a navigator with poor impulse control. When he failed to repay his debts, Kamal was sold into indentured servitude, and died when Leila was eleven years old. She became a street rat, stealing to survive until she was old enough to go to sea, where her knowledge of her father’s trade made her an officer on the Man’s Promise. She came to think of the ship’s crew as the family she’d never had.

Three years later, her ship was boarded by the Wormwood. Captain Barnabas Harrigan threw the bound captive Leila overboard; fortunately, Chopper dove in to rescue her. She served under Mr. Plugg until a mutiny put him down; now, she serves of her own free will.

PERSONALITY
Leila holds to the First Law, and refuses to worship any god. She has the traditional Rahadoumi interest in philosophy and rhetoric, valuing her bonds with the ship’s crew above all – without gods to rely upon, the Rahadoumi have always relied upon each other.

She has no desire to return home, though. A pirate’s life holds too much appeal for her.

Leila hates slavers – an unusual attitude, perhaps, for someone who hails from a nation where the practice is legal.

Her father raised her in the Yazanite fashion, which prohibits her from touching a man she has not married. Leila realized her preference for other women during her time aboard the Man’s Promise; she has become friends with Nakayama Reiko, but fears to voice her attraction to the samurai. She is still trying to form friendships with the other PCs.

Leila doesn’t quite get along with the “godslave” Sandara Quinn, but she keeps a civil tongue for the crew’s sake. She has also been slow to forgive Haroun and Maoud al-Azrad for serving Mr. Plugg, but she will… someday…

TACTICS
During Combat Leila prefers to sneak to hard-to-reach places, so she can fire her shortbow at unsuspecting targets. If threatened in melee, she defends herself with both blades until she gets the chance to put some distance between herself and her foe.
Morale Leila is fiercely loyal to the PCs, especially Chopper (who saved her life) and Reiko (with whom she is smitten). Though she isn’t a front line fighter, she will not retreat from a skirmish unless ordered to. 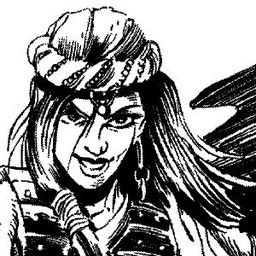